It’s one thing to describe a destination wedding in Cabo San Lucas, waxing poetic about barefoot nuptials on a secluded beach or an elegant terrace reception at a luxurious villa carved into a cliffside with magnificent Land’s End views. It’s quite another to see what the region’s spectacular settings really look like, at an actual wedding with a real bride and groom, and photos documenting the entirety of this most magical of experiences.

We’ve chosen a selection of photos from some of our favorite recent weddings in an attempt to show those pondering their own destination wedding in paradise what’s really possible, and how they can use weddings past as an idea generator for planning their wedding future. 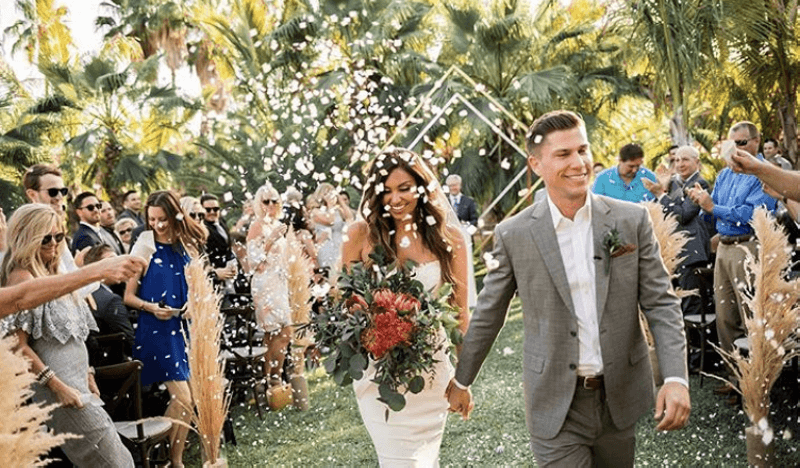 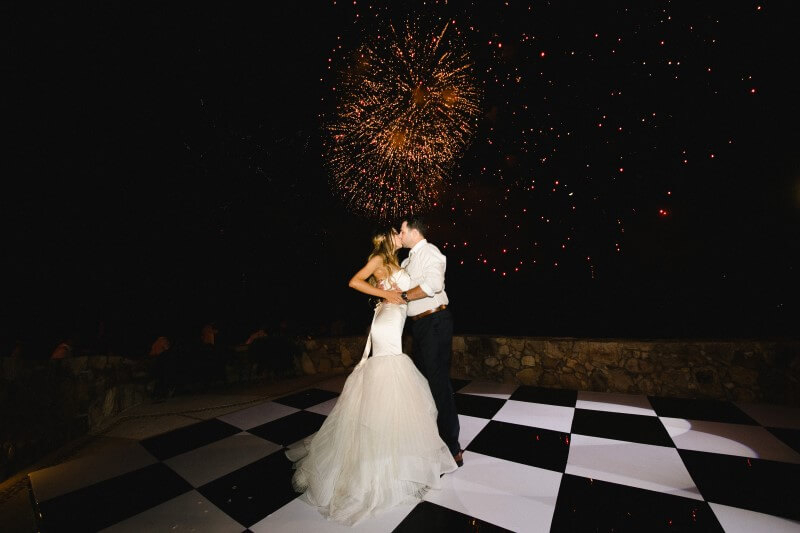 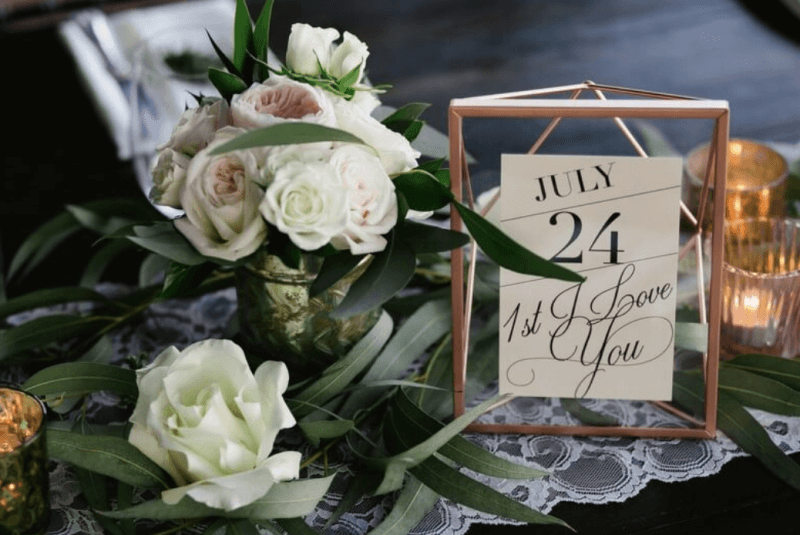 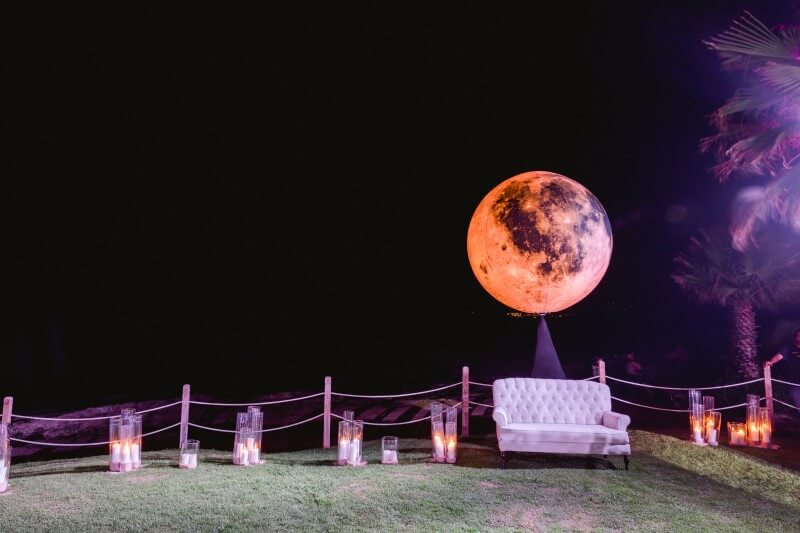 When it comes to a “destination wedding in Cabo”, the views always matter. But although mere beauty alone is captivating, the best local wedding planners are able to skillfully integrate the breathtaking panoramas into a more nuanced presentation, teased out from consultations with couples, then refined through digital models and floorplans. Bridget and Keirsten’s photogenic nuptials at the luxurious Villa Land’s End, for example, set a visually striking tone with a colorful symphony of blues, greens, greys and whites.

Framed on the magnificent snow white balcony of a luxurious hillside villa, with the infinity-edged pool and endless Pacific Ocean below showing the same remarkable shade of sparkling sapphire blue, this ceremony layout was going to need to feature some eye-catching accents to distinguish it from the simple yet jaw-droppingly beautiful backdrop. Much of this visual challenge was accomplished with a single grace note, the garlanded green circular wedding arch, which introduced a new hue into the color palette, one which not coincidentally blended seamlessly with the wedding party attire. 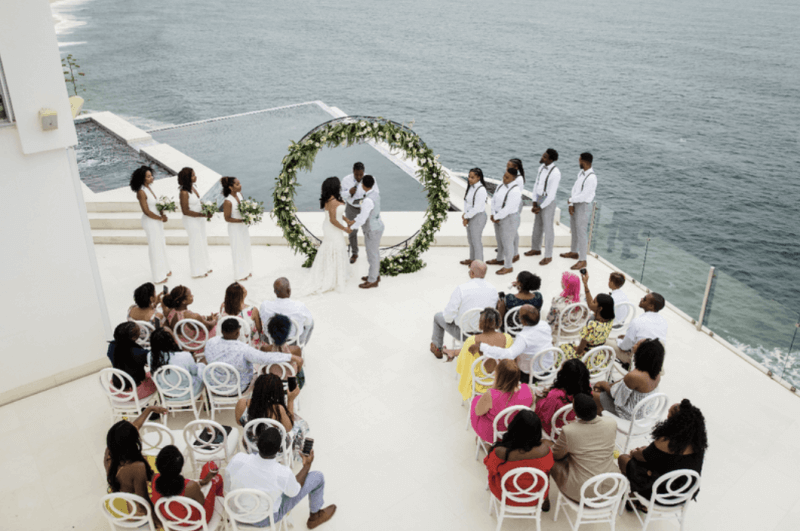 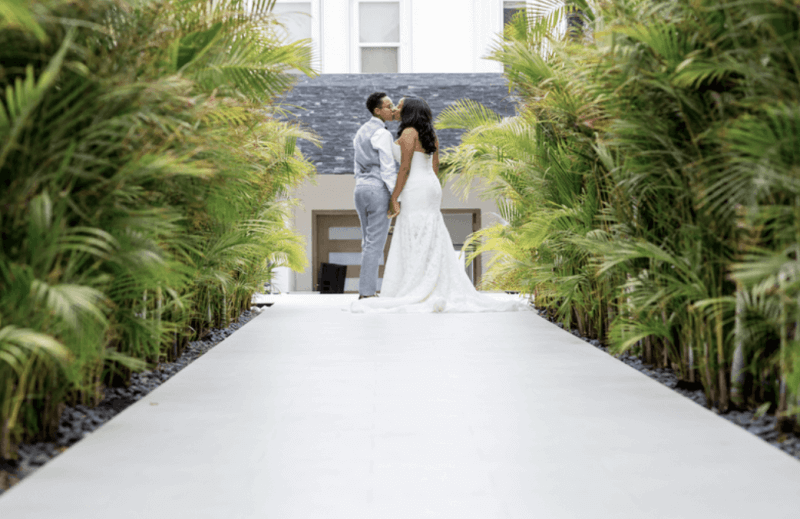 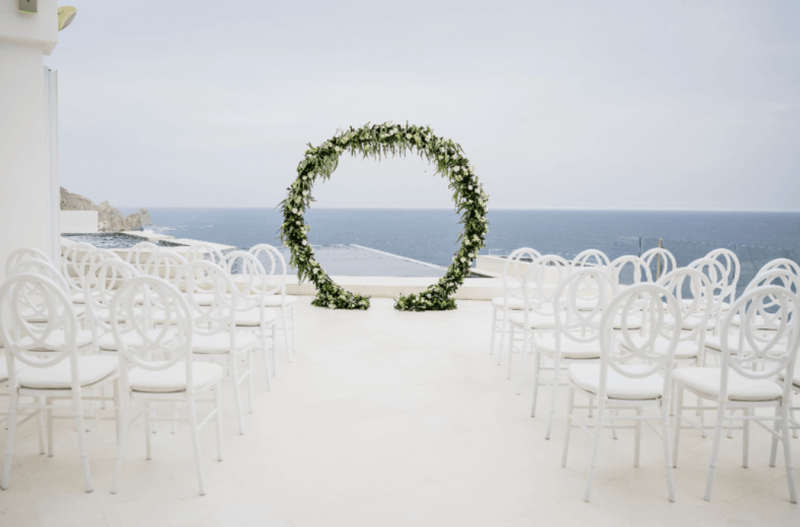 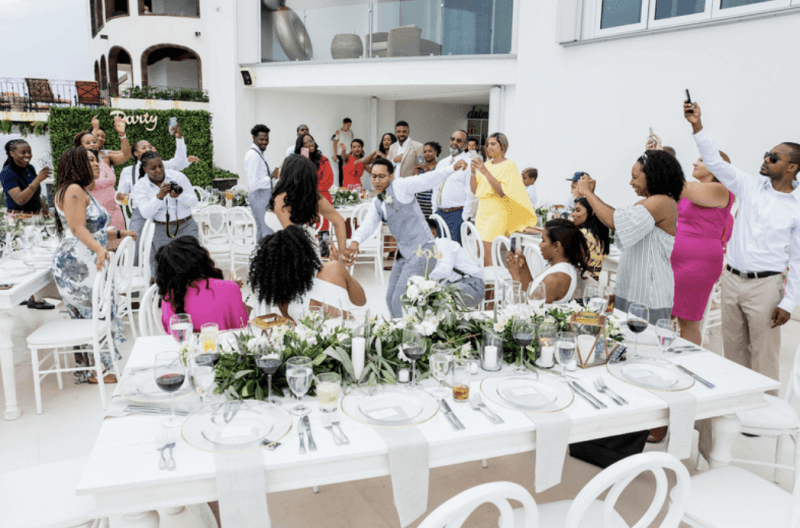 Long-time visitors to the region might make the connection between the garlanded wedding arch and Cabo San Lucas’ most famous landmark, a naturally occurring granite arch at Land’s End that is nearly, but not quite visible from the terrace at Villa Land’s End. It’s a clever reference, but much more than that. As noted above, it’s a visual grace note, and one of many touches of green that you can see in photos taken throughout the day.

Notice the traditional white gown of the bride and the gray vest and pants of the “groom” in this stylish same-sex ceremony, which are reflected, respectively, in the attire of the two wedding parties.  Notice how the gray and white ensembles “pops” visually against the green wedding arch. Notice how the lush tropical backdrop in photos of the happy couple features nearly identical shades of green. Notice how the green shows up on the dinner tables in flower arrangements, and even on the dinner plates themselves with garnishes.

This was an intimate and loving wedding affair, but also a consummately fashionable one, with every detail planned to perfection.

Destination Wedding in Cabo #2 – Uliana and Peter at Villa Bellissima

Every couple has a dream vision for their destination wedding in Cabo. For Uliana and Peter, it was a ceremony that took advantage of the region’s breathtaking natural beauty, and a classically elegant reception at Villa Bellissima, a luxury villa located in the exclusive hillside neighborhood of Pedregal in Cabo San Lucas.

Villa Bellissima’s charms include stunning elevated views of Land’s End, miles of golden sand beaches, and a vast expanse of Pacific Ocean blue. But it’s not just the picturesque vantages that work wonderfully for a destination wedding reception, but also the villa’s gated and immaculately manicured grounds, where dinner tables were flawlessly set for an al fresco feast to feed family and friends in attendance.

Notice the fine linen, polished silverware, gold-accented chargers, glassware and candlesticks. This was a graceful proceeding, with an enduring elegance reflected in the reception’s table settings, and augmented by post-prandial entertainment that included live musical performances from a charro clad mariachi band and local Latin jazz standouts Daline Jones and Diego Ramirez, as well as a spectacular fireworks display overhead to fête the newlyweds. 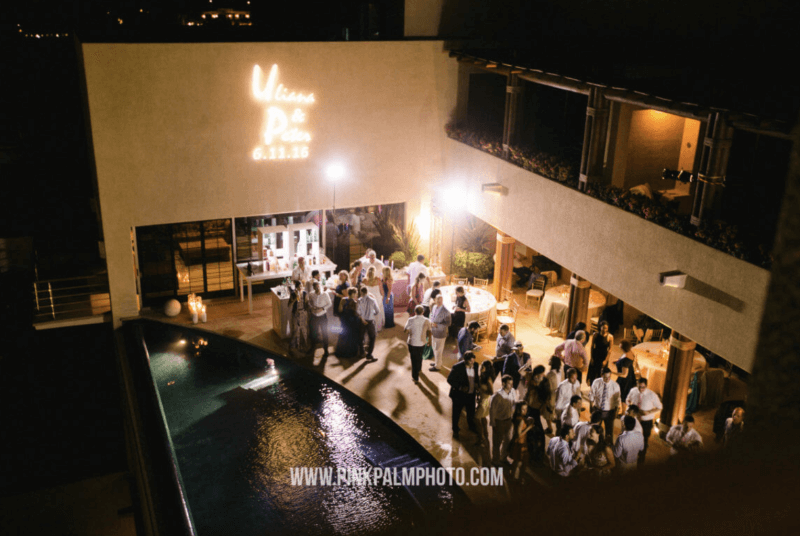 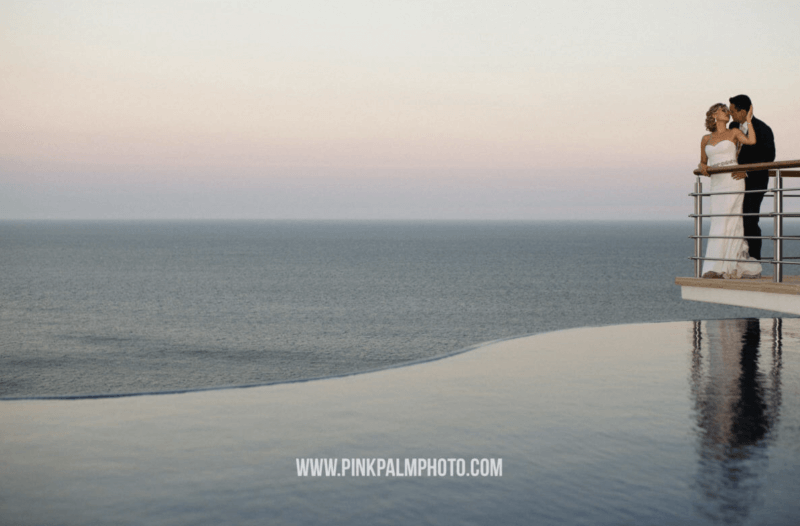 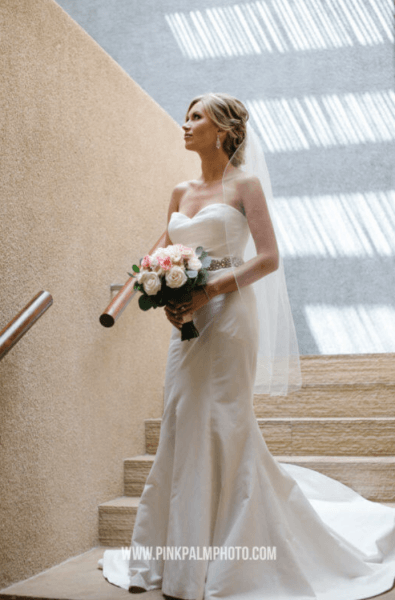 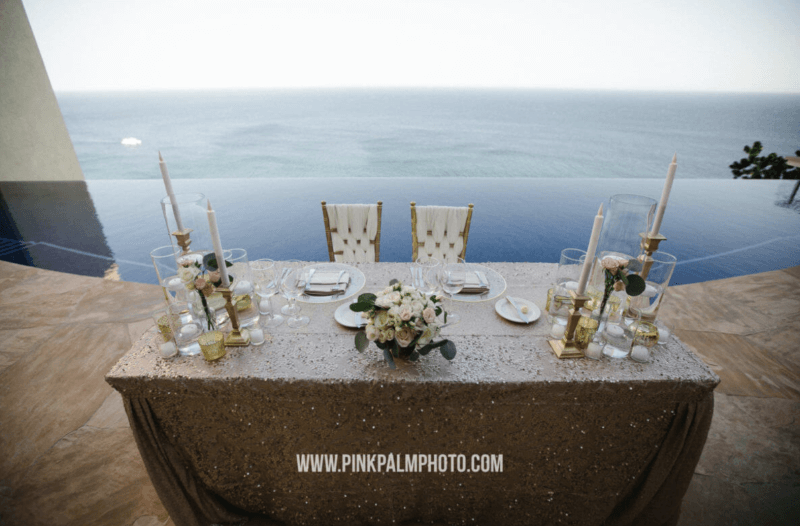 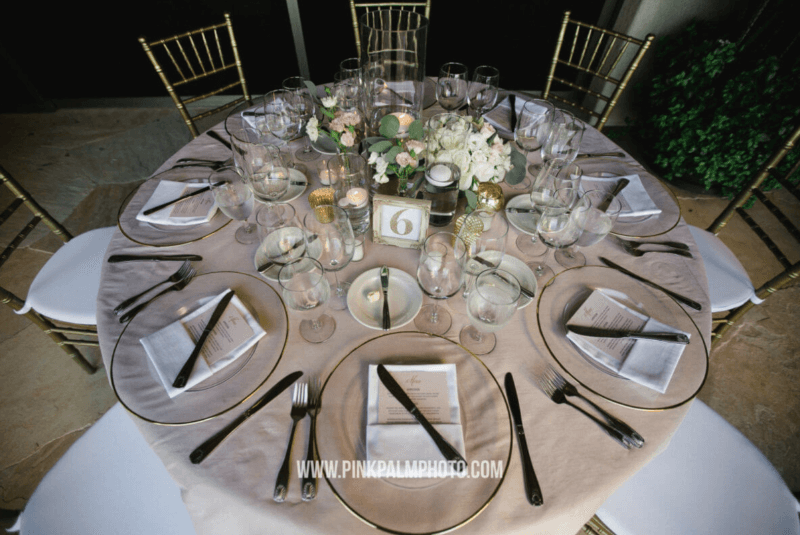 Those who have spent any time at all in Los Cabos know that the region has its own inimitable style, a sort of laid-back yet casually elegant aesthetic that reflects the languorous rhythms of a sun-kissed tropical paradise. Call it rustic beachfront chic, with a few “only in Baja” accents thrown in for good measure.

Jacqueline & Gabe’s nuptials at Villa Estero reflect this uniquely Cabo sensibility to a tee. Unlike the other two weddings we’ve discussed, this one took place not in the hillside heights of Pedregal, but rather at Villa Estero, a sprawling beach adjacent villa at the upscale Puerto Los Cabos development located just outside San José del Cabo. Named for the region’s enormous fresh water estuary, which first attracted the attention of Spanish mariners in the late 16th century, Villa Estero’s architectural details reflect colonial Spanish as well as decadent Roman influences (the latter in the stone aqueducts which shower water into an infinity-edged pool that looks out over the glittering blue waters of the Sea of Cortés).

The ceremony was a testament to Cabo’s beachfront orientation, with a simple altar set on a nearby stretch of soft golden sand. Family, friends and wedding party members held hands in a circle as vows were exchanged between the bride and groom. Bridesmaids wore tropical pink, and soon after the ceremony more formal footwear was traded for flip flops or bare feet.

The stone terrace by the pool provided a colorfully lit stage for the reception, with guests enjoying food, drinks, dancing, and convivial conversations around the villa fire pit. Wooden signage and distressed wooden furnishings added to the understated boho charm, and overhead palm tree fronds were blown to and fro by fresh sea breezes…just as one would expect of a Cabo destination wedding. 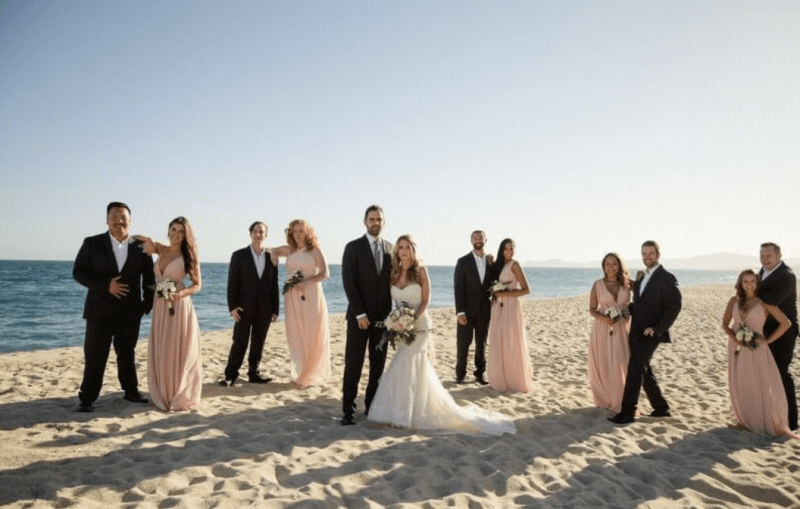 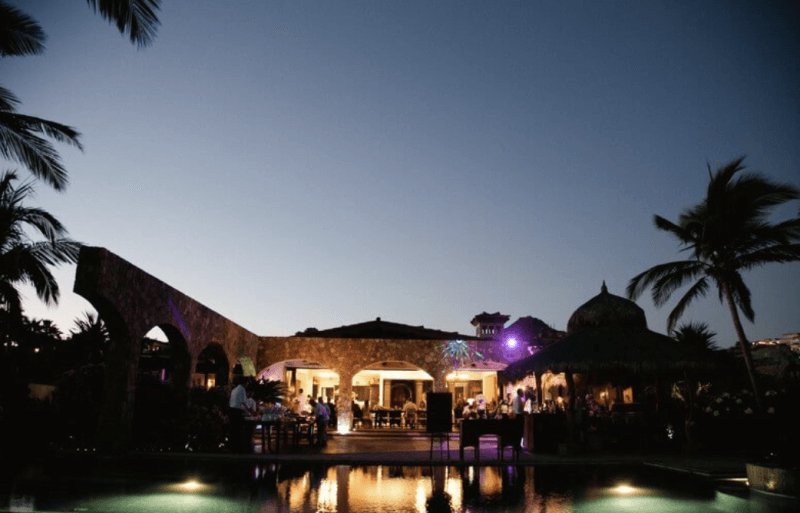 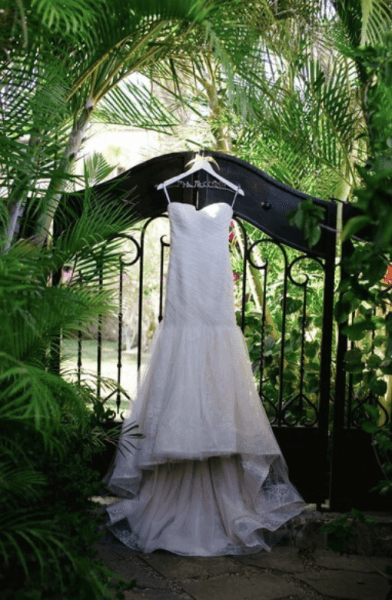 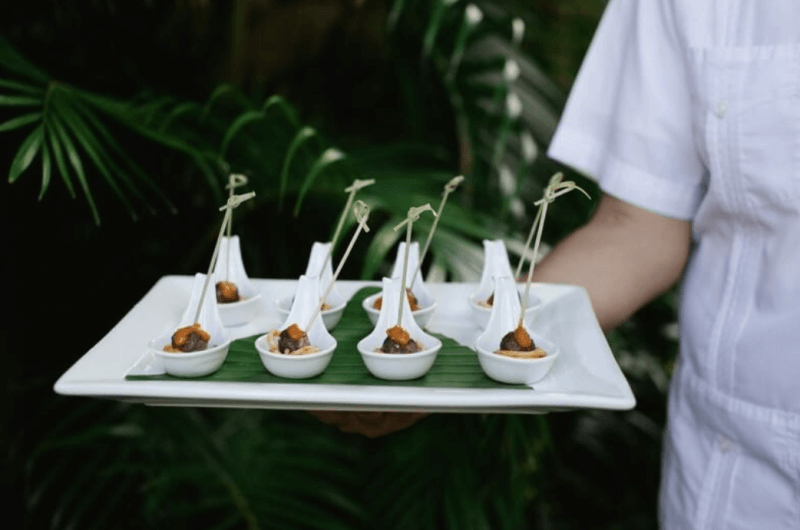 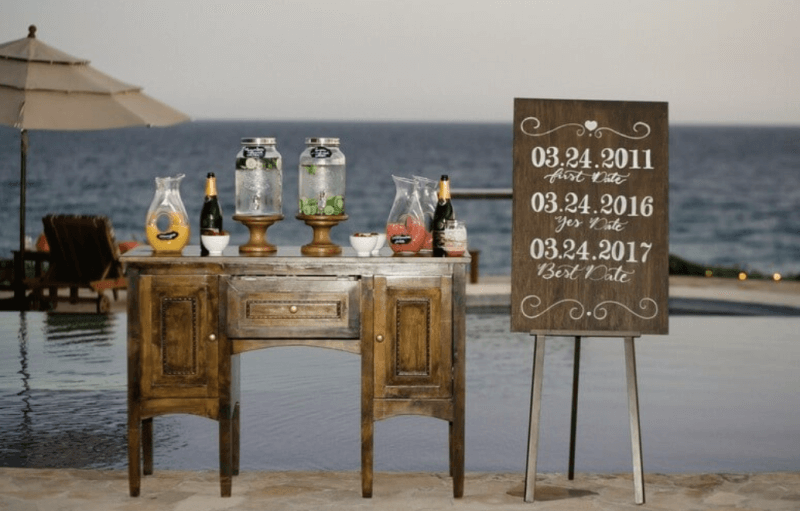 Ready to Plan Your Own Destination Wedding in Cabo?

Creative Destination Events is the premier full-service planning and production company in Los Cabos, and there’s nothing our talented team likes more than working with couples to plan and execute their dream wedding.

Our process at CDE starts with a one-on-one consultation in which your dedicated planner will help you define and refine your vision for the perfect wedding. From there, we’ll start the transition from vision to reality by means of timelines, digital renderings and three-dimensional floorplans, before finally helping you pull off the biggest moment of your life with smooth precision and seamless production. Call us today at (619) 819-9180 for an initial consultation. 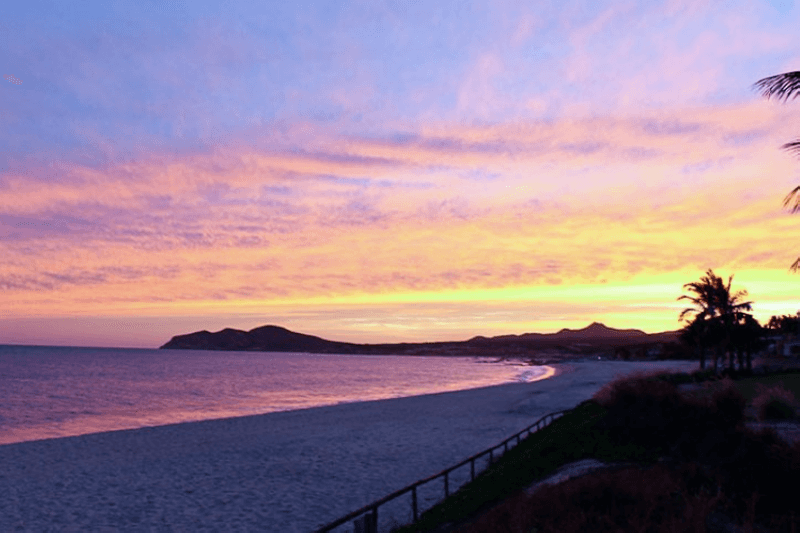 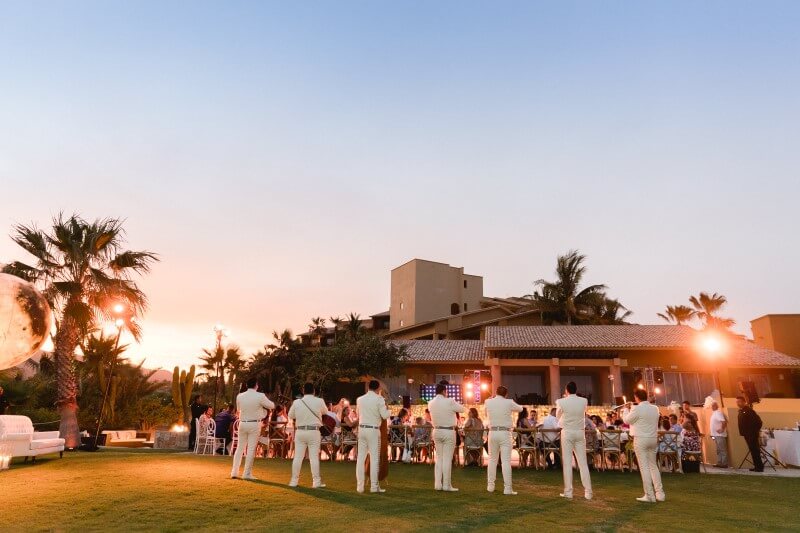 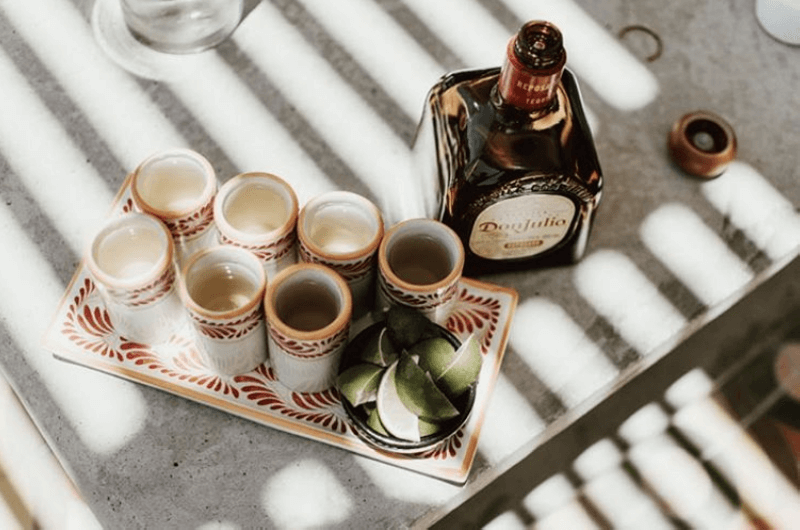 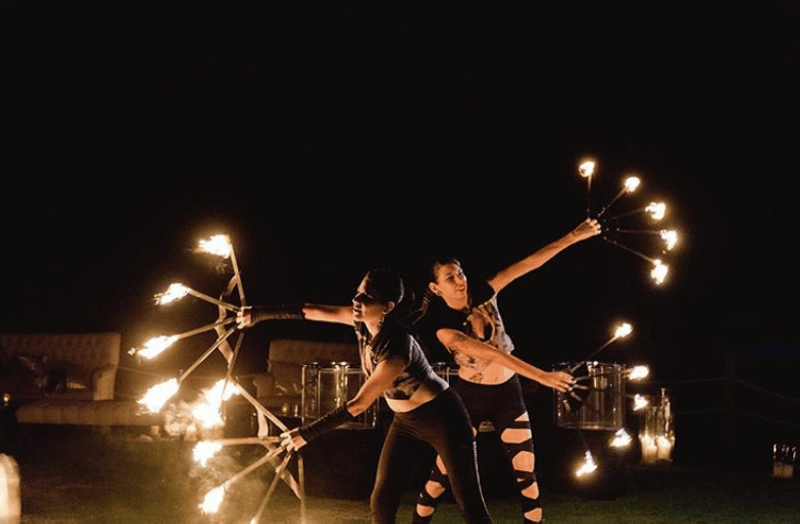 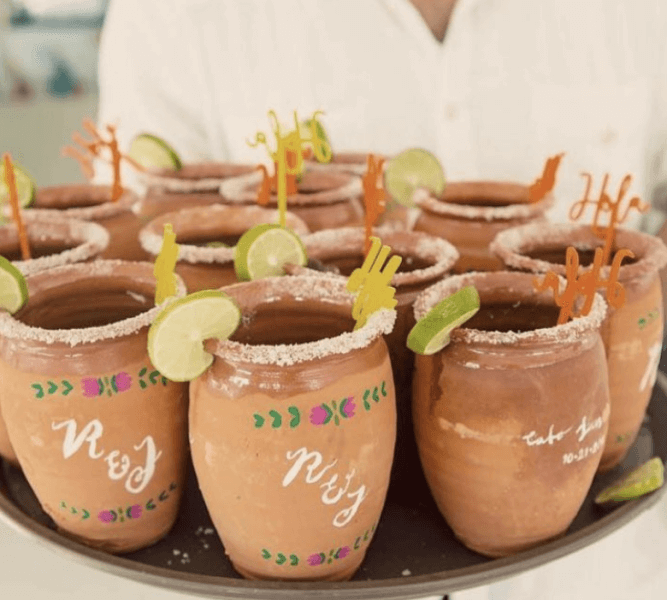 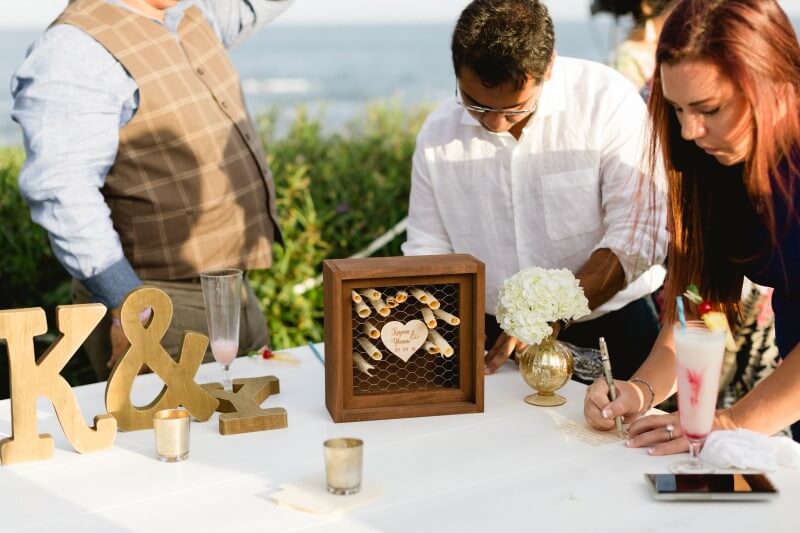